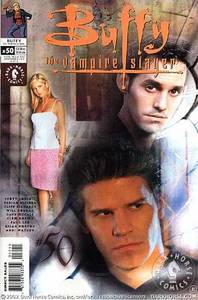 By SCOTT LOBDELL, CLIFF RICHARDS, and ANDI WATSON; Wraparound cover by PAUL LEE and BRIAN HORTON Scott Lobdell wraps up his first apocalyptic run on Buffy with a special fiftieth issue, featuring more story pages, as well as two backup features: a prose story by Lobdell, with illustrations by Paul Lee; a short comic by Andi Watson; and a wraparound painted cover by regular cover artists Lee and Brian Horton. "Hellmouth to Mouth" concludes as Buffy finally rescues Xander and Dawn from the crew that's nearly destroyed Sunnydale - The Scourge! They soon find that the only thing worse than the Scourge is their secret leader, revealed this issue! Buffy's not just fighting for her friends' and family's life, she's fighting for a chance to live her own life, to be more than a fearless vampire hunter. Who better to have backing her up than former sadistic Slayer Faith and the vampire hunting vampire himself, Angel?! On sale October 30 FC, 40pg (4 of 4)