I AM LEGION THE DANCING FAUN 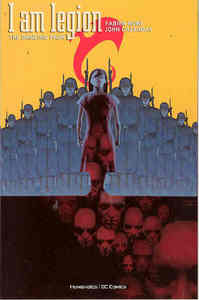 Written by Fabien Nury Art and cover by John Cassaday     Superstar artist John Cassaday (PLANETARY) joins European comics/screenwriter Fabien Nury for a breathless World War II spy/supernatural thriller!     December, 1942. As World War II rages, two supernatural entities pursue their own relentless combat. It's a conflict that involves ideologies as much as men, with the course of the war itself at stake!     Amidst this chaos, the Nazis pursue a top-secret project, code-named "LEGION," centering on a young Romanian girl with apparent supernatural talents...and her abilities could give the Nazis unimaginable power... On sale Aug 18 / Prestige Format / 64 pgs / FC