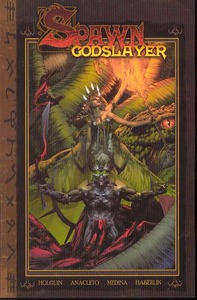 story by BRIAN HOLGUIN art & cover by JAY ANACLETO August 23 64 pages FC $6.99 In a far distant age of a world not our own, the Old Gods are dying, slaughtered one by one by the dark blade of a mysterious, unearthly marauder... Under the protection of the goddess Llyra, the island kingdom of Endra-La, oldest and most storied of the Shrouded Isles, has avoided the cruel fate suffered by lesser kingdoms. But on the eve of a royal wedding, black sails are spotted on the horizon. Alarms are sounded and fire fills the skies. The Godslayer has come for them at last. SPAWN: GODSLAYER is a dramatic re-imagining of TODD McFARLANE's Spawn, a sweeping tale of fallen kingdoms, ancient curses and doomed love, sure to appeal to fans of epic fantasies like Elric, Conan and The Lord of the Rings. 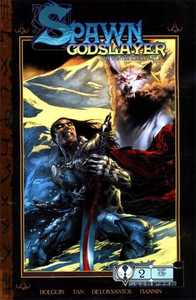