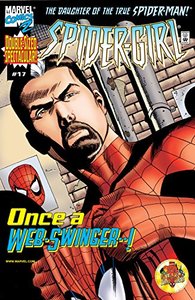 Tom DeFalco/Pat Olliffe/Al Williamson ? THE SCOOP: By popular demand?Peter Parker finally dons the webs and once again becomes Spider-Man! ? THE STORY: Peter is desperate to save his daughter from the clutches of the man called Kaine, but May doesn't want her father to interfere... especially when he becomes the web-slinger again! This is her battle, and she wants to prove that she's truly ready to be Spider-Girl! This one's got it all: The shocking conclusion to the Kaine Saga! A major turning-point in the relationship between Peter and Mayday! Guest appearances by the mysterious Darkdevil and the Kingpin! And the much-requested return of the original Spider-Man! ? THE CREATORS: By the ongoing team of writer Tom DeFalco, penciler Pat Olliffe and inker Al Williamson. ? THE FORMAT: 48 pages, with ads. Cover by Pat Olliffe & Al Williamson FC, 48pg