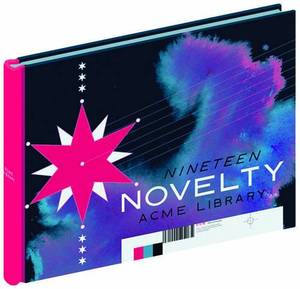 (W/A) Chris Ware The penultimate teen issue of the ACME Novelty Library appears this autumn with a new chapter from the electrifying experimental narrative "Rusty Brown," which examines the life, work, and teaching techniques of one of its central real-life protagonists, W. K. Brown. A previously marginal figure in the world of speculative fiction, Brown's widely anthologized first story, "The Seeing Eye Dogs of Mars," garnered him instant acclaim and the coveted White Dwarf Award for Best New Writer when it first appeared in the pages of Nebulous in the late 1950s, but his star was quickly eclipsed by the rise of such talents as Anton Jones, J. Sterling Imbroglio, and others of the so-called psychovisionary movement. (Modern scholarship concedes, however, that they now owe a not inconsequential aesthetic debt to Brown.) New surprises and discoveries concerning the now legendarily reclusive and increasingly influential writer mark this nineteenth number of the ACME Novelty Library, itself a regular award-winning periodical, lauded for its clear lettering and agreeable coloring, which, as any cultured reader knows, are cornerstones of any genuinely serious literary effort. Full color, seventy-eight pages, with hardbound covers, full indicia, and glue, the ACME Novelty Library offers its readers a satisfying, if not thrilling, rocket ride into the world of unkempt imagination and pulse-pounding excitement.