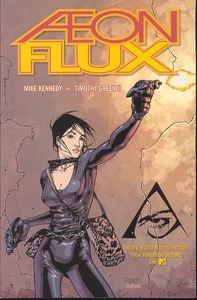 Four hundred years in the future, the last of Humanity will live behind the protective walls of Bregna, an idyllic utopia built to shelter them from the deadly jungle growing beyond. Life in Bregna is perfect, or as perfect as the government can make the people believe. But not everyone is fooled by their mood-altering propaganda-a small band of freedom fighters wish to see things change, and they just might manage to pull off this impossible dream with the help of their top secret agent, the sexy, deadly Aeon Flux. As Bregnan authorities prepare a new weapon to use against the jungle pounding at their walls, Aeon prepares to turn their plans against them. But this time she is not alone-she has been instructed to train a new agent, a fiery young woman named Sithandra, who may not be all that she appears . . .    Collecting the four-issue miniseries. Miniseries  bridges  original MTV/Liquid Television series with Paramount/MTV smash movie. Movie available on DVD spring 2006. An all-new adventure that reintroduces Aeon Flux to fans and newcomers. The stories are fast-paced and intriging conceptual science fiction.