story JONATHAN ROSS art / cover BRYAN HITCH After the Event that created a whole generation of super-powered kids, Tommy Watts has finally discovered what his gift was: The ability to give super powers to others. Now, as the government's enhanced soldiers battle the outcast super-teens, Tommy can't decide which side to fight for! 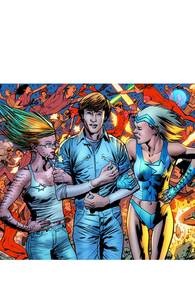