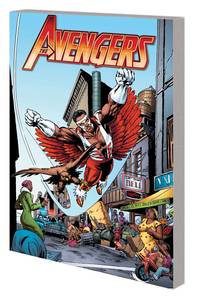 The Falcon is soaring into animation and film - now learn his secret origin in this comprehensive collection of his formative adventures! Witness all the action as Sam Wilson, along with his trained falcon, Redwing, battles to save his fellow Harlem from slumlords, evades a malfunctioning Sentinel and takes on the megawatt menace Electro! Plus: The Falcon teams with Captain America to defeat the Red Skull, and soon becomes Cap's costumed partner-in-crimefighting! But though villains like Mortimer Freebish and the Silencer are relative walks in the park for the high-flying hero, will the Falcon's own traumatic past be his deadliest foe? Collecting FALCON #1-4, MARVEL PREMIERE #49, CAPTAIN AMERICA (1968) #117-119, and material from CAPTAIN AMERICA (1968) #220 and #276-278.