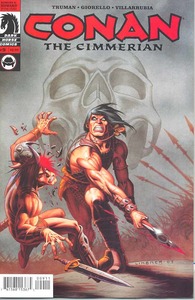 CONAN THE CIMMERIAN #9 Timothy Truman (W), Tomás Giorello (P), José Villarrubia (C), and Joseph Michael Linsner (Cover) On sale March 18 FC, 40 pages $2.99 Ongoing Nahtok, a powerful wizard with the desert tribes of Shem under his command, now looks to expand his motley empire northward into the politically unstable Koth-where Koth's leaders are more likely to kill each other on the battlefield than join together to face a common foe. The only thing standing in Nahtok's way is the small border kingdom of Khoraja and their battered military forces, now led by the inexperienced Princess Yasmela. Amalric's mercenaries-with Conan still riding among their numbers-are charged with reinforcing Yasmela's depleted army, as the conquering Nahtok draws near and Yasmela is haunted by both evil threats and holy visions. Tim Truman, Tomás Giorello, and José Villarrubia continue their adaptation of Robert E. Howard's "Black Colossus," a chilling Robert E. Howard tale that finds Conan at a strange crossroads in his mercenary career and on the path to the largest-scale battle of his life, as a clash between Nahtok and Amalric's men appears inevitable! Conan the Cimmerian © 2009 Conan Properties International LLC ("CPI"). CONAN, CONAN THE BARBARIAN, THE SAVAGE SWORD OF CONAN, HYBORIA, and related logos, characters, names, and distinctive likenesses thereof are trademarks or registered trademarks of CPI. All rights reserved. 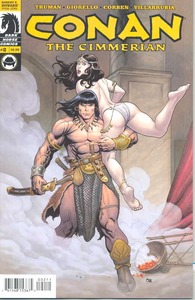