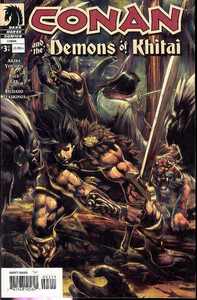 King Conan battles an onslaught of monsters unlike any he's seen in this penultimate issue of the series that pits the King of the Western world against a phantom warrior seeking to crush the Far East beneath his demonic fist. Shinzen was the greatest swordsman in the exotic kingdom of Khitai, until he became warped with dark power and stole the prized mystical blade Hakkiba. Now, Conan, his last remaining comrade, and the elite of the Khitai royal guard must stop Shinzen-no matter how many twisted beasts of unspeakable horror he throws in their way. Also, don't miss the cover by comic-art marvel Pat Lee!

CONAN & THE DEMONS OF KHITAI 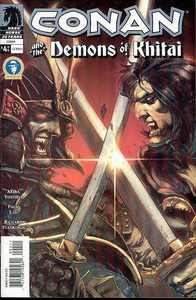