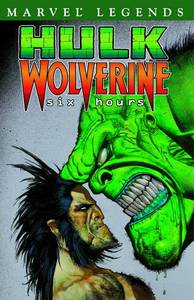 COVER BY SIMON BISLEY BRUCE JONES (W)/SCOTT KOLINS (P) Two of 2003's biggest movie stars unite in one suspenseful adventure! Lost in the Canadian wilderness, Dr. Bruce Banner, a.k.a. The Incredible Hulk, and Wolverine only have six hours to rescue a woman and a boy from two desperate drug dealers. It's a race against time as these two Marvel icons attempt to control their tempers long enough to save the hostages! Collecting HULK/WOLVERINE #1-4; plus INCREDIBLE HULK #181 (the first-ever appearance of Wolverine!) 128 PGS./FC/MARVEL PG