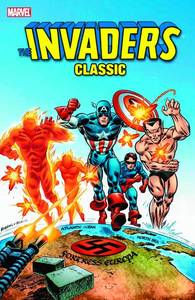 Written by ROY THOMAS Penciled by FRANK ROBBINS, RICH BUCKLER, DICK AYERS & DON HECK Cover by FRANK ROBBINS The Big Three of Marvel's Golden Age -- Captain America, the Human Torch and the Sub-Mariner -- entered their first alliance when the U.S. entered World War II! But the Axis had more than bombs to throw at them, as they soon learned in a battle with the Star-Gods! The Red Skull wants the Invaders themselves as Hitler's top hitmen, and only a second gathering of Golden Age greats can stop him! Featuring the first appearances of Spitfire, Union Jack and more! COLLECTING INVADERS #1-9, GIANT-SIZE INVADERS #1 and MARVEL PREMIERE #29-30. 240 PGS./Rated A ...$24.99 ISBN: 0-7851-2706-2 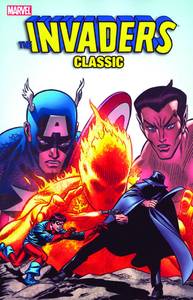