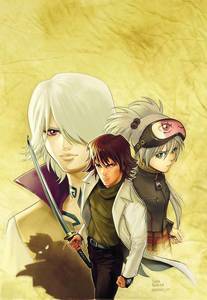 On sale December 1, FC, 32pg PHIL AMARA (W) and NÚRIA PERIS (A) From the creative minds behind Speed Racer comes...Karas! In the not-too-distant future, Japan is under seige by strange mechanical monsters led by a sinister ex-hero named Eko. Though the future looks bleak, all is not lost. There is a young hero chosen by the Landlord Yuri to fight against the phantoms that plague Japan. He is KARAS, a powerful armored being appointed to defend the innocent. With the help of Yuri, his mystical mentor,  Karas sets out to preserve the natural balance of the universe, and to prevent the friendly old-world monsters from being transformed into mechanical demons! Karas is the newest creation from the minds of Tatsunoko Production (the production company of Speed Racer and Battle of the Planets) and Keiichi Sato (The Big O). The comic written by Phil Amara (The Nevermen) and drawn by amazing newcomer Núria Peris-has a moody style and introverted characters that will appeal to fans of Vampire Hunter D, Ninja Scrolls, and Ghost in the Shell.