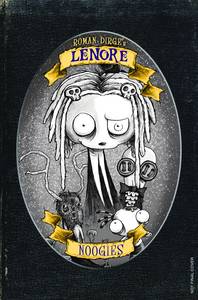 (W/A) Roman Dirge A PREVIEWS Exclusive! Lenore: Noogies collects the original Lenore comics in color for the first time, comics that went into multiple printings with over a million sold so far! Lenore might only be small, but her talent for mischief - and occasional wanton destruction - is anything but! Featuring stories about limbless cannibals, clock monsters, cursed vampire dolls, taxidermied friends, an obsessed would-be lover, and more fuzzy animal mutilations than should be legal, never has the term "something for everyone" seemed more sinister and bizarre! This fantastic exclusive hardcover will feature a superb new inset cover and exclusive extra material including a signature page from Roman Dirge and four frameable color art cards shrinkwrapped with the book!