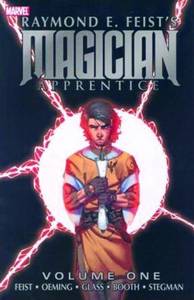 Written by RAYMOND E. FEIST with Special Introduction by the Author Adapted by MICHAEL AVON OEMING & BRYAN J.L. GLASS Penciled by BRETT BOOTH & RYAN STEGMAN Cover by BRETT BOOTH Pug and Tomas are two kitchen boys living in the medieval fantasy world of Midkemia who dream of one day becoming heroes. But as the boys start on the path to manhood and begin their apprenticeships to their respective masters, they stumble upon a shipwreck and learn that invaders from a strange and distant world have found a way to Midkemia through portals known as "rifts" and are preparing for a full scale assault. As Tomas learns to be a soldier and Pug studies the path of a magician, both boys find themselves growing into the heroes they had hoped to become - but growing apart as the effects of the Riftwar change both of their lives forever.  All this and a cover gallery, sketches, and letters from author Raymond E. Feist and Michael Avon Oeming. Collecting MAGICIAN APPRENTICE #1-6. 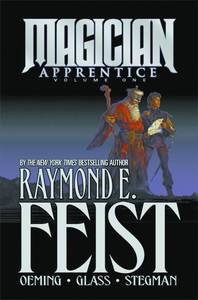