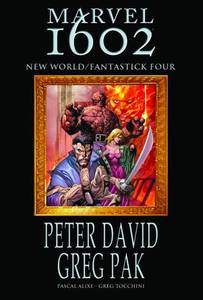 Written by GREG PAK & PETER DAVID Penciled by GREG TOCCHINI & PASCAL ALIXE Cover by LEINIL FRANCIS YU   It's the year 1602 - and though there are characters you might think you know, none of them are the same as you remember. There's a young man named Peter with amazing spider-like abilities - but instead of New York City, he's a proud resident of the settlement at Roanoke. There's a group of four adventurers endowed with amazing powers - but instead of a spaceship, they steer a boat. And the rampaging giant known as the Hulk? Well, he's pretty much the same. Though King James of England might prefer things stay the same, the Earth is in flux - with much of the change occurring across the Atlantic in the New World. Though Sir Nicholas Fury and the super-powered Witchbreed may have disappeared, more and more superhumans are making themselves known - which prompts the king to take drastic measures. Elsewhere, another ruler - Otto Von Doom of Latveria - is taking drastic measures of his own as he mounts an expedition to what he believes to be, quite literally, the ends of the Earth. Along for the ride are the beautiful but deadly Natasha Romanova, the bizarrely powered four who are frightful and a kidnapped playwright by the name of William Shakespeare. But hot on their flying ship's tails are another super-powered quartet: the Fantastick Four! Collecting MARVEL 1602: NEW WORLD #1-5 and MARVEL 1602: FANTASTICK FOUR #1-5. 240 PGS./Rated T+ ...$19.99 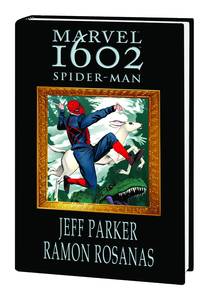 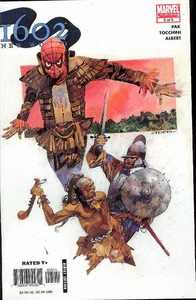