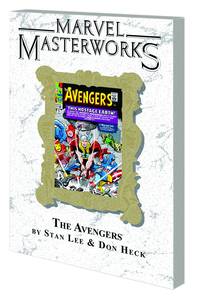 Written by STAN LEE Penciled by DON HECK with JACK KIRBY & DICK AYERS Cover by JACK KIRBY & DEAN WHITE Brought together to fight the biggest menaces in the Marvel Universe, Iron Man, Thor, Giant-Man and the Wasp represented the heavy-hitters of the super-hero set, but Marvel heroes don't just hang out, they live, breathe, argue-and even fall out. In an innovative twist that would come to define the Avengers, Stan Lee chose to have those original Avengers depart, leaving Captain America alone to carry on. But it was who replaced them that really got reader's attention. Hawkeye, Quicksilver and the Scarlet Witch-all conflicted and villains in their own right-became Cap 's new recruits creating a dynamic, unpredictable and exciting quartet that to many would become the Avengers's heart and soul. So sit and back enjoy the evolution of Earth's Mightiest Heroes as they battle Kang the Conqueror, the Mole Man, the Red Ghost, Count Nefaria, Baron Zemo's Masters of Evil, the Mandarin and the Swordsman. With guest appearances by Spider-Man the Incredible Hulk himself, it's a Marvel Masterwork from beginning to end! Collecting THE AVENGERS #11-20. 224 PGS./All Ages ...$24.99