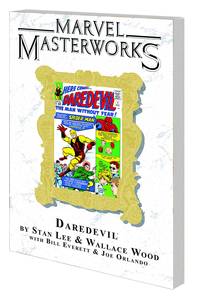 Written by STAN LEE Penciled by WALLACE WOOD with BILL EVERETT & JOE ORLANDO Cover by BILL EVERETT & DEAN WHITE Born to a past-his-prime prizefighter, Matt Murdock's luck always ran a step behind his good intentions. When a daring act to save a man's life results in an accident that blinds young Murdock, he finds that the same accident has enhanced his remaining sense to super-human levels. After his father's murder those powers make him Daredevil, the protector of the New York's mean streets. Launched in 1964, Stan Lee and Bill Everett's Daredevil debut was as gritty as they came, a tale of murder and sacrifice tempered with the desire to protect the downtrodden. Matt Murdock was someone different, and you'll see just why in his inaugural Marvel Masterworks! Featuring the first appearances of core characters like Foggy Nelson and Karen Page, as well as classic villains like the Owl, the Purple Man, Stilt-Man and Electro, and guest-appearances by the Fantastic Four and the Sub-Mariner, they're classics as only Stan Lee made them! With artwork by the incomparable Wallace Wood and Joe Orlando, I dare you not to reserve your copy today! Collecting DAREDEVIL #1-11. 256 PGS/All Ages ...$24.99 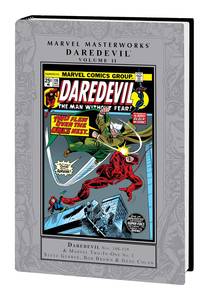