Written by STAN LEE Penciled by JACK KIRBY & STEVE DITKO Cover by JACK KIRBY & DEAN WHITE Dr. Robert Bruce Banner may have the appearance of a mild-mannered scientist, but after being caught in a gamma bomb explosion, he became the unstoppable engine of destruction known as the Incredible Hulk! Hot off the success of the FANTASTIC FOUR, Stan Lee and Jack Kirby's atomic update on the Dr. Jekyl/Mr. Hyde tale, mixed the joy of giant monsters with Cold War intrigue and added a heavy dose of psychological drama to create a formula that even decades later has readers clamoring for more. So for each and every purple pants loving Hulkophile, the MARVEL MASTERWORKS are proud to present the Hulk's original six-issue solo series in one amazingly restored volume. You'll meet Bruce Banner, Rick Jones, General Thaddeus "Thunderbolt" Ross of the U.S. Army and the lovely Betty Ross for the first time. You'll see the Hulk's first appearance as the gray goliath before he turned that familiar shade of green. You'll watch the Hulk bust knuckles with the far-out Toad Men, the subterranean Tryannus, monstrous Mongu, and the Metal Master, and to make it that much better, the incomparable Jack Kirby and Steve Ditko illustrate it all. Collecting THE INCREDIBLE HULK #1-6 176 PGS./All Ages ...$24.99 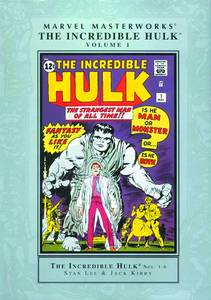 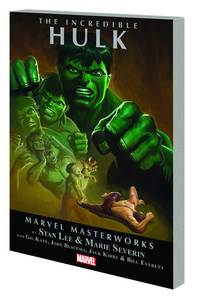