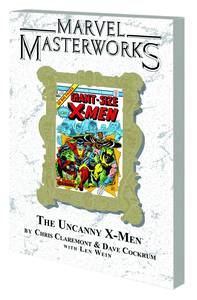 Written by CHRIS CLAREMONT, LEN WEIN & BILL MANTLO Penciled by DAVE COCKRUM Covers by GIL KANE & DEAN WHITE The Children of the Atom, runts of the Silver Age litter, are reborn as the All-New, All-Different team of mutants that took the world by storm! With the original team held hostage by unknown forces, Professsor X recruits an international cast including Wolverine, Storm, Colossus, Nightcrawler, Banshee, Sunfire and Warpath to take on the mantle of the Uncanny X-Men! Marked by progressive politics and personal conflicts, these All-New X-Men redefined super-hero teams for a generation of readers that can't get enough X-adventure to this day. Here for the first time you'll see Wolverine throw down with Cyclops; experience the shocking death of an X-Man; tremble at the return of the towering Sentinels; watch as X-Man battles X-Man as the new team attempts to tear apart the old; and bear witness to the sacrifice of Jean Grey. They're mutant milestones of the highest order, one and all - the stories that set the table for a comics revolution - so reserve that copy today, True Believer! Collecting GIANT-SIZE X-MEN #1 & X-MEN #94-100. 192 PGS./All Ages ...$24.99