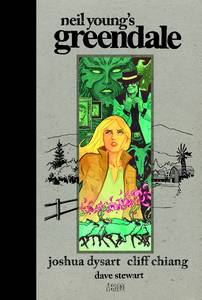 Written by JOSHUA DYSART Art and cover by CLIFF CHIANG Legendary singer-songwriter, musician and activist Neil Young brings one of his most personal albums, GREENDALE, to comics. Overseeing the work of acclaimed writer Joshua Dysart (UNKNOWN SOLDIER) and fan-favorite artist Cliff Chiang (HUMAN TARGET), they compose a graphic novel that explores a whole new dimension to the album that Rolling Stone voted as one of the best of its year. In the Fall of 2003, as the nation gallops into war, a politically active teenage girl named Sun lives, loves and dreams in a small California town named Greendale. Sun's always been different. There's been talk that the women in her family have all had a preternatural communion with nature. And when a Stranger comes to town - a character whose presence causes Greendale to, well, go to hell - she'll find herself on a journey both mystical and mythical. To face the Stranger, she'll unearth the secrets of her family in a political coming-of-age story infused with its own special magic. Advance-solicited On sale June 9 160 pg, FC, $19.99 US MATURE READERS