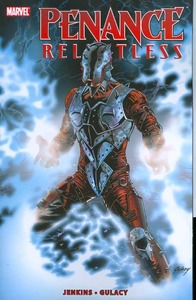 Written by PAUL JENKINS Penciled by PAUL GULACY Cover by PAUL GULACY From the pages of CIVIL WAR: FRONT LINE and THUNDERBOLTS! Once he was a hero, now only a shell of Robbie Baldwin remains. As Penance, he begins a slow descent into madness: the most hated man in America, blamed for the disaster at Stamford, tortured by visions of his failure and obsessed with strange, seemingly meaningless numbers. A relentless pursuit begins... Collecting PENANCE: RELENTLESS #1-5. 120 PGS./Rated T+ ...$13.99 ISBN: 978-0-7851-2857-1