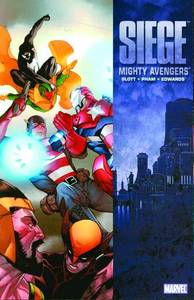 Written by DAN SLOTT Penciled by KHOI PHAM & NEIL EDWARDS Cover by KHOI PHAM What do you do when you've just been anointed Scientist Supreme by one of the universe's eternal protectors - and Norman Osborn, the Absorbing Man, Loki and Ultron show up to menace the planet? For founding Avenger Hank Pym, that's easy: Let the call ring out, "Avengers Assemble!" Rushing headlong into the dramatic events of Siege, Hank Pym leads his old-school team of Mighty Avengers into final battle! With Hercules, Quicksilver, the Vision, Jocasta, USAgent, Amadeus Cho and Stature by his side, does the brand-new Wasp have the backup he needs to end all these threats before they bring an end to the Mighty Avengers?  Collecting MIGHTY AVENGERS #32-36. 128 PGS./Rated A