Written by MARC GUGGENHEIM, MARK WAID, ZEB WELLS, & MATT FRACTION Penciled by JOHN ROMITA JR., BARRY KITSON, TODD NAUCK, PAT OLIFFE, FABRIZIO FIORENTINO, MARCOS MARTIN & PAOLO RIVERA Covers by PHIL JIMENEZ & JOHN ROMITA JR. It's the climax to a year's worth of Spider-Man stories as questions are answered, and Spidey's new world is rocked to its core! Who's been terrorizing people as Menace? Who's behind the Spider-Tracer Killings? Who's going to be the mayor of New York City? All the answers are here! Plus: The world's greatest super hero teams up with the 44th president of the United States in "Spider-Man Meets the President." This is your chance to own the groundbreaking story that had fans lining up and attracted unprecedented media attention! Collecting AMAZING SPIDER-MAN #583-588; material from AMAZING SPIDER-MAN: EXTRA #2-3; and "Gettysburg Distress," a Captain America/Spider-Man/Abraham Lincoln team-up previously available only online! 216 PGS./ Rated A ...$29.99 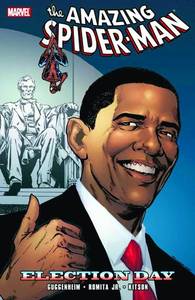