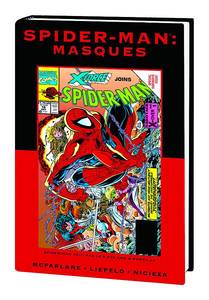 Written by TODD MCFARLANE, ROB LIEFELD & FABIAN NICIEZA Penciled by TODD MCFARLANE & ROB LIEFELD Covers by TODD MCFARLANE Industry superstar Todd McFarlane's blockbuster run barrels on! The Hobgoblin is back, out of control and more deranged than ever! Will even the demonic Ghost Rider be enough to help Spider-Man stop him? Then, Spidey takes a trip into the dark, lightless sewers under Manhattan to face Morbius the Living Vampire, which can mean only one thing: the return of the black costume! And finally, it's a titanic two-part team-up with Marvel's heavy hitters of the '90s that takes the word "widescreen" literally as Spider-Man partners with X-Force to stop the rampaging Juggernaut! Collecting SPIDER-MAN (1990) #6-7, #13-14 and #16; and X-FORCE (1991) #4. 144 PGS./Rated A