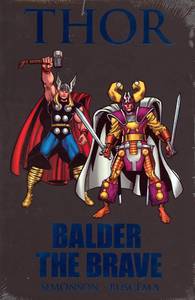 Written by WALTER SIMONSON Penciled by SAL BUSCEMA & WALTER SIMONSON Covers by WALTER SIMONSON War in Hel! Odin the All-Father is gone, and death goddess Hela is stockpiling souls for the fight to take his place! The mighty Thor leads Asgard's finest to rescue the dead from a fate WORSE than death, while Thor's brother-in-arms Balder battles giants to rescue his beloved Queen Karnilla! The God of Thunder and the God of Light - which one will lead Asgard into the face of coming dooms? Plus: a longtime Marvel villain makes the ultimate sacrifice, but for whom? Collecting BALDER THE BRAVE #1-4 and THOR #360-362. 176 PGS./Rated T+ ...$24.99