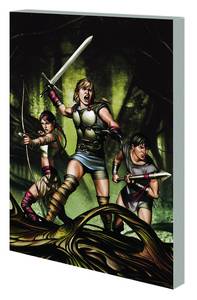 Written by AKIRA YOSHIDA Penciled by GREG TOCCHINI Cover by ADI GRANOV Explore the early years of the God of Thunder in this adventure full of Marvel myth and magic! Join young Thor and his godly companions, Balder and Sif, as they travel the mystical land of Asgard on a quest of cosmic proportions. When Odin, the All-Father, sends his favorite son to gather four mystical elements that he will use to craft a powerful new weapon, not even Ragnarok will be able to stop the boy who would be king! Then, after their adventures across the wilds of Asgard, it's back to school for Thor, Balder and Sif ... but when you're in training to be a warrior, study hall isn't so quiet! The lives of the three young friends take an interesting turn when Amora the Enchantress enters the picture. Sparks will fly when their schooling in swords and sorcery comes head-to-head! Collecting THOR: SON OF ASGARD #1-12. 296 PGS./Rated T+ ...$34.99