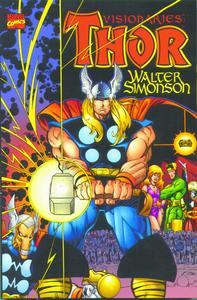 Thor was always one of the toughest assignments at Marvel. Producing the adventures of the Norse thunder god was an intimidating task; making the travails of Asgardian heroes interesting to a comic book audience was a staggering chore. It didn't help that any creator who leant his skills to the title would inevitably draw comparisons to the Wagnerian power of the character's initial artist, comics legend Jack Kirby. Defying convention, writer-artist Walt Simonson threw all preconceived notions out the window and over a two-and-a-half-year span produced epic adventure that held an ever-growing readership in thrall. Simonson wove a complex series of adventures that shuttled mercilessly from the golden spires of fabled Asgard to the streets of New York City to the farthest stars in the Universe. The entire pantheon of the Aesir was completely reimagined through Simonson's powerful images, becoming both more contemporary while retaining their regal, mythic trappings. Now Marvel presents the finest work of this visionary creator in this collection. Close your eyes and allow yourself to enter a world of rock trolls and frost giants, fire demons and trickster gods. Walt Simonson will take you into this fantastic world and make seem as real as your own.