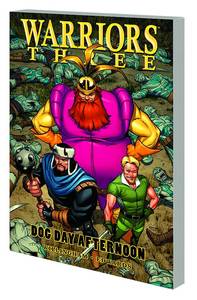 Written by BILL WILLINGHAM, STAN LEE & GARY FRIEDRICH Penciled by NEIL EDWARDS & MARIE SEVERIN Cover by SALVA ESPIN The town of Ash Valley, Washington is massacred overnight, the carefully positioned bodies perplexing local law enforcement. But the gruesome scene is familiar to Asgardians, and there can be only one culprit: the Fenris Wolf. Long ago, Fenris, son of Loki, was imprisoned for slaughtering an entire Viking village, chained away on an island in Niflhel for all eternity - until agents of Advanced Idea Mechanics freed the wolf in the hope of researching his genetics. With the mythical beast set free upon the world and thirsting for vengeance against his Asgardian captors, the combined might of Volstagg, Fandral and Hogun won't be enough to protect Asgard. As the Asgardian army assembles for its last stand against the monster, the Warriors Three set off on an epic journey to discover the secret to stopping the beast. Plus: a classic tale of the Hulk in Asgard! Collecting WARRIORS THREE #1-4, the Hulk story from TALES TO ASTONISH #101 and INCREDIBLE HULK (1968) #102. 128 PGS./Rated T+ 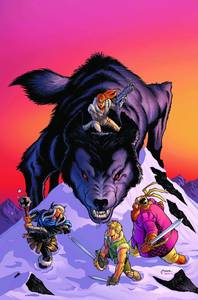