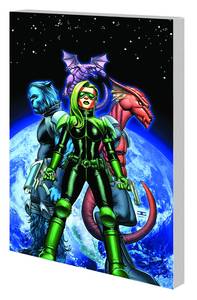 Written by KIERON GILLEN Penciled by STEVEN SANDERS Cover by JOHN CASSADAY Spinning out of ASTONISHING X-MEN comes a story that will take you places you've never been!  After Secret Invasion, Agent Brand is no longer the top dog at S.W.O.R.D.  Forced to share her leadership post with former Avengers-liaison Henry Gyrich, Brand is less than pleased. Will the arrival of her boyfriend, X-Man Beast, help her out?  Not when she discovers Gyrich's plan for fixing S.W.O.R.D. is to rid Earth of ALL ALIENS!  Brought to you by Kieron Gillen (DARK AVENGERS: ARES), Steven Sanders (Five Fists of Science) and topped off with covers by ASTONISHING X-MEN artist JOHN CASSADAY! Collecting S.W.O.R.D. #1-5 120 PGS./Rated A ...$15.99